MongoDB Vs MySQL: A Complete Tutorial 2020 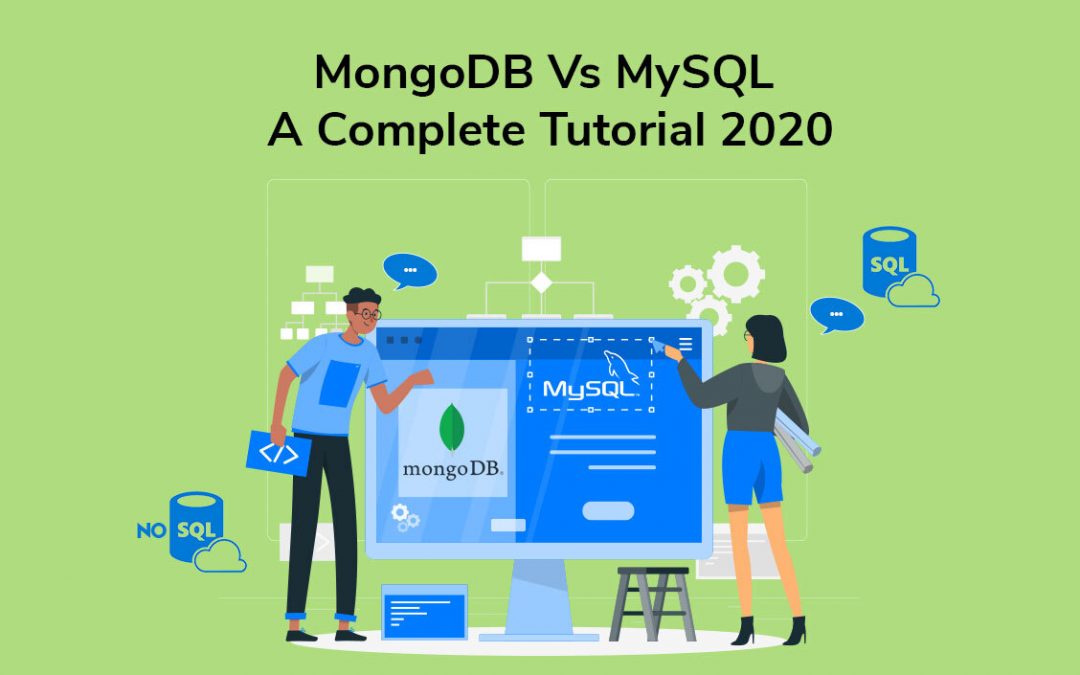 Over the years, numerous databases of high-quality and unparalleled features have emerged to satisfy the needs of modern websites and applications. The database is primarily used to store, organise and retrieve data in a way that enables users to search and find information easily and intuitively. Such database technologies that fulfil these essential requirements come in all sizes and shapes – from small to large, from simple to complex.

Noted the rising numbers of popular databases, you’d probably be confused over which one to choose from – Redis, PostgreSQL, MongoDB or MySQL and the list goes on. To take the burden off your shoulder, we’ve got you an in-detail article for choosing between the two most popular databases, MongoDB and MySQL.

Written in C++, MongoDB is one of the widely-used document databases that comes with its support for the NoSQL language. Developed and maintained by MongoDb Inc, the first version of MongoDb was released in 2009. The document model of MongoDB makes it easier for the developers to learn and use this database. Due to which it’s right to say that it is one of the few databases that is designed for the ease of development and scaling. For additional information, check out https://docs.mongodb.com/

What is it known for?

When should you opt MongoDB?

Business goals and requirements differ from one organisation to another. Despite the cutting-edge features that one technology offers, you must always choose what best fits your project and users. Confused over whether to run MongoDB or not, following are some of the things to consider.

List of the top organisations who trust and run MongoDB as their database technology are as follows.

Being distributed and developed by Oracle Corporation, MySQL is one of the most popular relational database management systems (RDBMS). It stores data in the form of tables – rows and columns and uses SQL (structured Query Language) for the accessing and transferring of data and manages the database via commands such as “SELECT”, “UPDATE”, “INSERT” and “DELETE”. The data (information) that is stored, processed and retrieved in MySQL is highly-organized and conforms to a particular format. Therefore, it is the most popular when it comes to structured databases at present.

What is it known for?

When should you opt MySQL?

Having said everything about MySQL database and what it provides, you might be wondering when and why you should opt for MySQL database. If you’re looking for a database to fulfil the following requirements, then MySQL would be the best choice.

Want to install MySQL as your database, visit our blog post on Installing MySQL on Ubuntu 18.04

Now that we’ve got a glimpse of the MySQL and its features let’s see who takes advantage of this most reliable database.

Comparison between MongoDB and MySQL:

Since both MongoDB and MySQL are open-source and most popular database software. Unless and until if you haven’t compared and analysed some of its parameters such as performance, schema flexibility, relationships and so forth, it’s unfair and too early to conclude. Henceforth, to make it a fair play, let’s have a look at what each of these databases holds within and which one of them enables your application to scale up and down over time.

MongoDB is a document-oriented database and rightly so since it follows the format of key-value pairs known as a document store. These documents store related information together and use the MongoDB Query Language (MQL) for access.

As mentioned before, MySQL stores into tables and makes use of the Structured Query Language (SQL) for accessing the database. Whenever you need to access data in an application, you need to perform an action called “Join” – merging data from multiple tables.

Since MongoDB is document-based, the fields will differ from one document to another meaning you do not need to define the document structure to the system, as the documents are self-describing.

Whereas in MySQL, you need to pre-define your database schema and set up rules to govern and control the relationships between the fields in the tables.

In MongoDB, to find documents, the find() command is used and to manage data, it involves commands such as UPDATE, SAVE and REMOVE methods.

As known, MySQL uses SQL wherein, it employs commands such as INSERT, SELECT, UPDATE and DELETE to manage data. With a relational schema, there is no duplication of data.

Before going with the differences, it’s necessary to know about full-text search. Full-text search is the ability to search quickly all the instances of a term (keywords) To make it possible, every word in a database will be indexed and eliminates stop words such as “a”, “the”, “and” and so forth.

With MongoDB, you have the availability of several indexing options. At the same time, it doesn’t offer its complete support for partial indexing, but luckily, you’ve third-party tools to overcome this limitation.

In order to evaluate the database performance and speed, you need to consider various aspects like database design, application query patterns and load on the database being just a few.

Without the need to compare, MongoDB is often faster to retrieve a single document as its document-model store’s related data together than to JOIN data across multiple tables in MySQL.

Having said that, let’s compare the execution of some of the basic features between MongoBD and MySQL.

As a quick summary, you went through what’s so popular about the MongoDB and MySQL databases, its highlights and the list of brands that rely upon these databases. Most importantly, you would have found the comparative table which outlines the striking differences between these two databases – MongoDB and MySQL. From this article, it’s well known that each of these databases has its own benefits towards the high-performance of modern websites and applications. Further, the parameters’ comparison would have cleared all your doubts with regard to which database is the most suitable in which aspects.